As ministers, we don't have a magic exemption from this challenge. As I talk to the campus pastors on my team, I hear mostly the same middle-class American anxieties and worries that our peers and our students are expressing. We want to be well off and comfortable. We want rights and security. We often find true sacrifice and real suffering out of reach.

Each January, we prepare for the return of the students by retreating together as a staff to reflect and encourage one another. This year, we each read the Narrative of the Life of Frederick Douglass in preparation. It was a chance to gain some perspective from a different time and situation. If you aren't familiar, Frederick Douglass was born a slave in the American South. He lived in slavery for over 20 years before escaping and becoming a prominent abolitionist leading up to the Civil War. He was a Christian, but he was also enslaved by those calling themselves Christians, and so he became a prophetic voice that still speaks today. He wrote, "I assert most unhesitatingly, that the religion of the south is a mere covering for the most horrid crimes, a justifier of the most appalling barbarity, a sanctifier of the most hateful frauds, and a dark shelter under which the darkest, foulest, grossest, and most infernal deeds of slaveholders find the strongest protection. Were I to be again reduced to the chains of slavery, next to that enslavement, I should regard being the slave of a religious master the greatest calamity that could befall me. For of all slaveholders with whom I have ever met, religious slaveholders are the worst. I have ever found them the meanest and basest, the most cruel and cowardly, of all others." 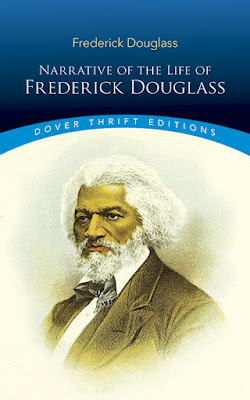 He exposed the hypocrisy of the church, a church that was all too often either silent or complicit in slavery. "Between the Christianity of this land, and the Christianity of Christ, I recognize the widest possible difference," and "they are always ready to sacrifice, but seldom to show mercy."

As a staff, we reflected on what our own blind spots might be and whether repentance is in order. We reflected on men and women like Douglass who truly suffered for doing what was right, and how different their suffering is from what most of us experience.

We also spent time pondering and discussiong a number of scriptures that speak to our attitude and perspective on the difficulties and suffering we do face. James says, "Consider it pure joy, my brothers and sisters, whenever you face trials of many kinds, because you know that the testing of your faith produces perseverance. Let perseverance finish its work so that you may be mature and complete, not lacking anything" (James 1:2-4). Paul writes "we also glory in our sufferings, because we know that suffering produces perseverance; perseverance, character; and character, hope" (Rom 5:3-4). And in Hebrews, "Endure hardship as discipline; God is treating you as his children... If you are not disciplined—and everyone undergoes discipline—then you are not legitimate, not true sons and daughters at all... but God disciplines us for our good, in order that we may share in his holiness. No discipline seems pleasant at the time, but painful. Later on, however, it produces a harvest of righteousness and peace for those who have been trained by it" (12:7-11).

These and others tell us that some of what God wants to do in us is only accomplished through pain and not comfort, calling into question how diligent we are in trying to create comfort and avoid pain in our day to day lives.

Suffering is integral to the Christian life. It's a part of our identity as people who follow and imitate a suffering Messiah. This is something we as pastors want to do a better job of communicating to our community and to ourselves. I highly recommend reading Frederick Douglass' book if you haven't before (or maybe haven't read it since high school :). I know this older brother in the faith would minister to you as well.

Tim is such a neat young man. He's someone I've had the privilege of spending some time with along the way, and I've watched him take his stand on the gospel, willing to pay whatever it costs. Like so many others, he has a strong Christian heritage from his parents, but at the university, he's had to choose Jesus and get to know him for himself. 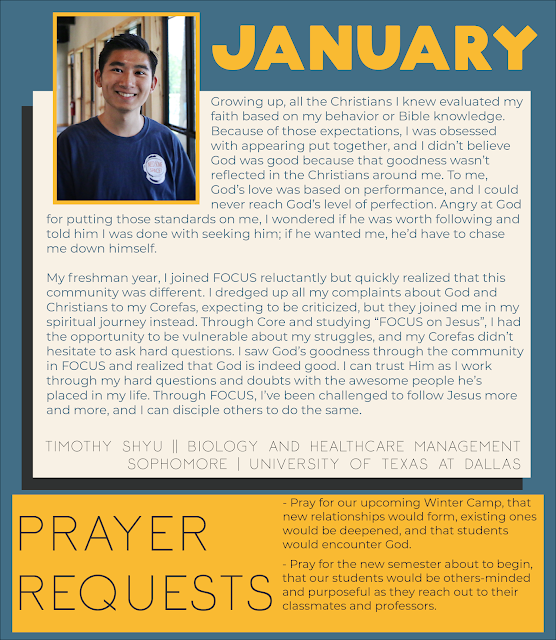 Thank you for supporting and praying for the mission to reach college students like Tim. Great things are happening!
at January 04, 2019