Something to be praying about--FOCUS @ UT Arlington

One of the convictions that I started college with is "Look to see where God is working and join Him." It comes from Jesus saying in John 5:19 that "the Son can do nothing by himself; he can do only what he sees his Father doing." If Jesus can't do anything meaningful on his own, then it's a good bet Brandon can't. It was with that conviction that I joined FOCUS at Richland College my freshman year, even though I was a UTD student. It was because I saw God working in their lives that I chose Leah Farmer (Lorenz), Mandy McWilliams (Lanciani), Kris Green, Beth Johnson (Lynas), and Tiffany Palmer as my close friends that first year, even though only Mandy was a fellow UTD student.  But, the Lord brought them all to UTD at the start of my sophomore year, and FOCUS at UTD was born.

Fast forward to 2014, and that UTD ministry has helped start ministries at 5 other campuses and trained scores of leaders for the kingdom. God always knows what He's doing!  Over the course of this year, I've started seeing His hand moving toward UT Arlington. I've had at least 10 people call me or one of my staff to ask about the possibility of starting a ministry there--students who plan to transfer there or go to grad school there, students with friends or siblings going to UTA, alumni interested in doing the FOCUS internship if they could help start a ministry at UTA.

UTA has been on our radar for a long time and has always been a part of our vision--to launch campus missions at every campus in the DFW area. But the timing has been up to God. Over the past few years, I've only been asked about UTA a handful of times, so having so many people talking and praying about it this year definitely has me asking if now is the time!

I recently met with the InterVarsity director at UTA, and he was super excited about the possibility of us sending a team. He said the various campus ministries are working closely together in unity to reach the campus for Christ, but he estimated that they are impacting about 1% of approximately 33,000 students. The need is great and the workers are few!

Will you join with me in praying and seeking God's will for FOCUS concerning UT Arlington? You might use this page of UTA facts to focus your prayers and get to know the campus. This would be a big move across the city. We would need to send the right team of staff and student ministers. We would probably need to start planning in January in order to be ready for the 2015-2016 school year.

Also toward that end, we will launch our first annual "Keep FOCUS Growing" Initiative in the second half of November. Our staff has fundraised to get us through this year, but we are asking God to provide the resources if He wants us to launch a major new campus ministry. So we'll be inviting our students, alumni, current supporters, and anyone else to consider giving a special gift to help us grow our impact in 2015. Keep an eye out for #FOCUS140 in the coming weeks.

Thank you for joining me in prayer and for joining with me financially in this work. You are making a difference in students' lives!

I want to end with a picture from our second annual Church and Campus Leadership Conference yesterday. We spent the day training hundreds of leaders and future leaders on visionary leadership. We had a lot of new students (including many freshmen!) invest a whole Saturday in order to become a better leader.  That's a good sign for what's to come! 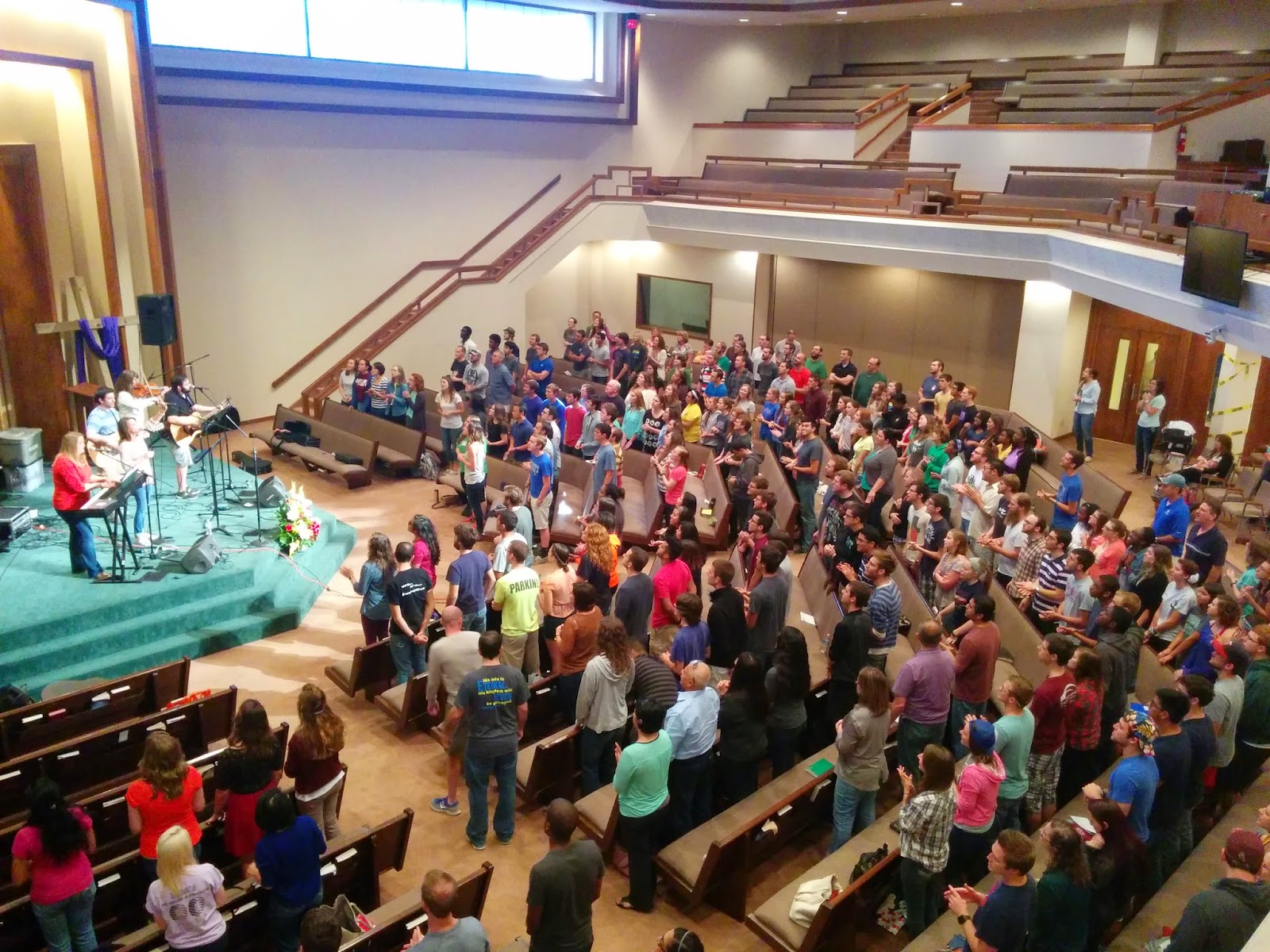 Coming off of Fall Camp

About a month into the school year, we take the UTD students out to a camp to deepen relationships and help them catch the vision of being followers of Jesus in college. This year our theme was "Defining Moments." As you know, life is full of moments, but some are moments of disproportionate influence on our present and future. When we were planning the weekend, one of my staff members said, "When I look back on my defining moments in high school and college, I wish I'd been better prepared."

I wish you could have heard the four students who shared their testimonies of defining moments. They all did an outstanding job of ministering to their peers! Raquel, who transferred from Richland College, shared about moments leading up to answering the call to leadership, something she had never envisioned for herself--"My biggest defining moments were when I gave up."  Gave up control. Gave up on her own plan.

Kimberly shared about a defining moment when she asked God for friends at UTD. But He told her He would give her more than that, a Christian community that reflects the love Paul talks about in 1 Corinthians 13! She grew up not being loved and not being loving toward others, "But now I get to be a leader and love others!" Your prayers and financial investments help build this community that gives students the chance to catch the vision themselves!
Jalen shared about growing up as a good Christian kid, but not really getting what Jesus was all about. He talked about looking down on and judging others, and about how he wanted Jesus to save him, not tell him what to do (anyone identify with that? :). But after facing his own sinfulness, he realized, "I have the capability of being obedient to Christ one small step at a time." What a powerful message! Sometimes what Jesus asks of you may seem too big and too hard. But with His Spirit, you are able to obey one step at a time.
Stephen reflected that what has defined him was a series of seemingly small things--deciding to attend a conference, a conversation with a friend about his purpose in college, showing up at an event. Maybe you are holding off on doing something "small" because it scares you for some reason or because you just haven't made a final decision. I encourage you to decide right now to be obedient. You never know when something small might end up being one of the defining moments of your life. If the Lord wants you to do something (this, of course, must be tested against His will already revealed in scripture), then you can know with certainty that it's good.
For so many students, a camp like this is a defining moment--when they make a friend or a decision that changes their life, when they hear the good news of Jesus for the first time, or when they get their first taste of real Christian community. Thank you for helping prepare these young people for the defining moments that are racing toward them. My prayer is that each of us will be purposeful in investing in young men and women. They aren't just the church of tomorrow; they're the church of today, and the world is in desperate need of men and women of God.
at October 07, 2014 No comments: