Off To A Great Start

We made it through move-in and Welcome Week! These are the two most important weeks of our calendar year, and the student leaders and staff pastors have done an incredible job of reaching new students. We had our first FNF at UTD last Friday night, and we had well over 250 students come. Most of the new students come because someone meets and invites them. I sat in the back and looked around trying to find a visitor no one was talking to--impossible! It's so encouraging to know that our core value of welcoming new people hasn't been lost as our group has grown. I'm hearing the stories already of freshmen, both Christians and non-Christians, who are excited to be a part of Friday nights and cores this year. Please be praying for the student leaders as they start setting up one-on-ones in the coming days and weeks.

The most exciting thing to me is seeing that this isn't a community led by a minister or two; it's a community of ministers. The Lord is answering our prayers to send out workers into the harvest field.

I've had the privilege of spending some time with Michael this summer, and it's so cool to see what the Lord is doing in his life. He didn't grow up knowing the Lord but started going to church because a friend invited him near the end of high school. Coming to college while his faith was still in its infancy, he was especially vulnerable. He went to SICM in May and stepped up to lead a core this fall! He has a sweet heart, and I treasure the time I get with him. I can't wait to see him love others the way he has been loved.
"When I came to UTD, I felt really lost. I didn't have many friends, and it seemed as if my life had no direction at the time. I had known for years that I wanted to study computer science, but in the fall of 2016 I was doing little else, and it felt painfully meaningless at times. I decided to come to Friday Night Fellowship one night and met Mark Merola. Even though we were complete strangers, Mark took a particular interest in me. After sitting with me during the service, he invited me to come to more FOCUS events and to join his Core. I started coming to Core regularly and became friends with everyone there. With Mark and the rest of my Core, I gained a group of supportive peers that I could live life with and learn from. I grew significantly in my faith and also as a person. Through studying the Bible and discussing it with members of my Core, I learned more about who Jesus is and my relationship with him deepened. My relationship with Jesus also led me to examine who I was as a person and make changes to how I act. FOCUS added a lot of meaning into my life and helped me see who I want to be. I have become a Core facilitator for the 2017-2018 school year, and I now know that the path toward God is the path that I want to take my entire life."

Thanks for making stories like this possible through your prayers and financial investments and hours spent with young people!

Why I'm a Campus Pastor, Part 3

Well, this last month has been unprecedented. I never thought I'd see all of our campuses closed, all of our students sent home to finis... 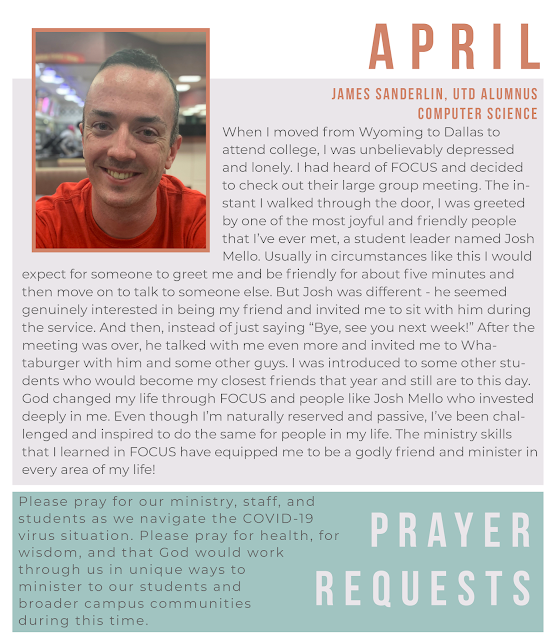