It's been a great month

I've spent a lot of time in my personal study this month looking at and thinking through the first few chapters of Genesis.  I'm amazed by God every time I take a fresh look at Him.  This time around, I was struck by the various "curses" in Genesis 3 & 4.  Human sin has serious consequences, breaking down our relationships with each other, with God, and with the world itself.  Yet, God barely finishes letting people know the new reality they've brought on themselves before He starts dispensing grace--moving to heal all those relationships.  Adam and Eve don't destroy each other, they build a family "with the help of the Lord."  Cain isn't in danger of being killed when he's cut off from his family--God Himself is his defender in the midst of exile.  And even as humans are cursed with death and cut off from the tree of life, God sets into motion His plan to conquer death and deliver us once and for all through Jesus.

Sometimes we struggle to reconcile the way God reveals Himself in the Old Testament with how He reveals Himself in the New Testament.  But God himself has declared, "I the Lord do not change" (Malachi 3:6).  James would write much later that the Lord "does not change like shifting shadows" (James 1:17).  And so we've been theming our sermons for Friday Night Fellowship (FNF) on campus with the theme "Unchanging."  Our current sermons series is about messages from God to His people.  His consistent message that He loves us, His invitation to repentance and forgiveness, His call to love Him and one another.  I hope you'll join me in praying that students will encounter the true and living God in the months to come--our unchanging, loving, gracious God.

The UTD ministry leaves for Fall Camp Saturday October 1.  This overnight camp is such an amazing chance for these young men and women to get to know each other at a deeper level and have more fun together than they can get in a couple hours a week.  One thing that we do every year that is especially impacting is our "Walk & Talks."  The student leaders pair up the students from their small groups to go off and share their stories with one another.  So many new friendships and discipling relationships have started out of these purposeful conversations.  The students rave about them every year.  Say a prayer that God will do something awesome at our camp this weekend!

Our corefas (small group leaders) are already dealing with some heavy stuff this year, so be in prayer for them as they have such a unique opportunity to minister.  In the past couple of weeks, I've heard from student leaders about issues with sexual immorality, homosexuality, loneliness, rage, betrayal and forgiveness issues, suicide of a friend, alcohol addiction, drug use, emotional fits attributed to demon possession, students cutting themselves, intense paranoia, sudden death in the family, dealing with serious injuries, obsessing over someone of the opposite sex, and a student going to jail.  And those are just the ones I know about and can think of off the top of my head!  But we know who loves these people and has the answers to every one of these problems.  So be in prayer for these student leaders that they would have supernatural wisdom and that the Spirit would gift them with all that they need.  Satan is at work, but "we are not unaware of his schemes" (2 Cor 2:11).  And pray for these students that they would turn to God and experience radical deliverance, comfort, community, and healing.

Finally, I had the chance to make a quick weekend visit out to San Jose, California to spend two days with a couple of UTD FOCUS alumni who have gone to work at Google.  It was refreshing after a busy August/September and encouraging to see two guys who were in my small group as freshmen doing great and serving the Lord on the west coast!  Here's a picture of us during my tour of the google campus: 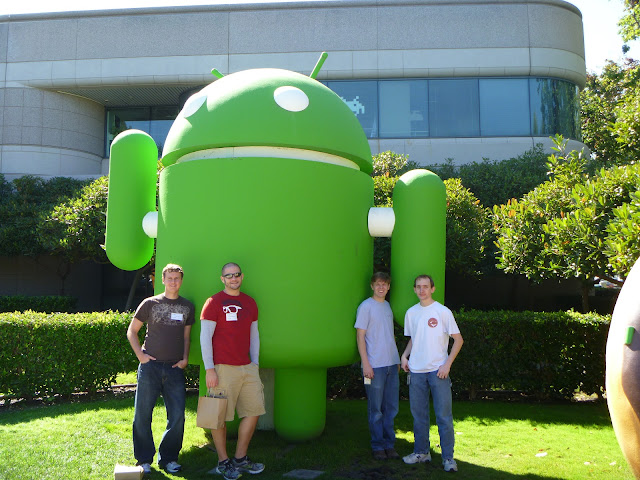 Thanks for your love, your support and your prayers.  You are truly making a difference on the campus and beyond.
at September 29, 2011 No comments: