We're a few days into reaching out to a new UTD freshmen class in the middle of a pandemic! As a mission to the campus, we're blessed that we actually have students on campus; a number of other schools with a FOCUS ministry have gone fully online for the fall, and our pastors are having to get extremely creative.

With that said, reaching out at UTD is tough. All of the move-ins are staggered so students aren't meeting their peers as they move in. Students are living on campus, but there are literally no events for them. The Student Union and most buildings are closed. The dining hall is take-out only. And it's very hot outside! Where and how are these students supposed to make friends?!?!

Enter FOCUS. I don't know of any other group that has hosted an event this week, but we've had multiple events daily! In the afternoons, we're hosting live Q&A "Get To Know FOCUS" sessions online as well as group online games on Zoom. These are the events we've advertised on campus, and we've had a handful of new students each day.

In the evenings, we've been informally hanging out outside (yes, we're wearing our masks for hours in this summer heat!) with various games and such. I think Monday night we had only 3 new students, which was a pretty discouraging start. (We're used to playing board games in the residence hall common areas on the first night of move-in and connecting with 40 to 60 new students!) But as the week has gone on, more and more freshmen are hearing about what we're doing and coming out. They are eager to make friends.

I've been asking some of these guys what they did that day, and they all say some form of "Nothing. I've just been waiting all day for this event to start." Another guy shared that he'd been thinking this week that he needed to do some thinking about his spiritual life, and coming to our event made that even clearer.

Our student leaders are being faithful and creative with reaching out. Some have invited new students outside the dining hall at both lunch and dinner in the heat of the day. One of our student leaders set up a UTD class of 2024 page on Instagram that now has over 1200 students following, and other students have been messaging them one by one to invite them to things! Some students have taken to throwing a frisbee outside the residence halls so that students will see something going on from their windows and come out.

And then when freshmen show up, FOCUS members welcome them, introduce them to others, take an interest in their lives, invite them to play games, and get their numbers to invite them to more stuff later. And all of that is with the sole intention of blessing them, not to get something from them. That's a little piece of the Kingdom of God come to UTD; it's how things should be. I'm so proud of them! In a hard year, they have such positive attitudes and a shared commitment toward and love for these new students.

Even on these nights when our efforts don't seem as successful as past years, I've been reflecting on how it's in those times of serving without success and acclaim that we can know that we are doing it for God and not just for external rewards. Perhaps God is more proud of us when we do what is right and love others even when it isn't "working".

But as of tonight (Thursday), I can see momentum building. They were spread over a large area (even outside and with masks on, we're social distancing as much as possible), but I counted over 85 people at the event tonight, the vast majority new freshmen! (And every group of new people I saw had a couple of our corefas in it.) And there are still many more students moving in Friday and Saturday. Please pray that we will reach the ones we need to reach, that we will be bold in connecting with them and loving them even before we know them, and that we will be careful and keep one another safe from disease.

Our Theme for the Year - A Voice in the Wilderness 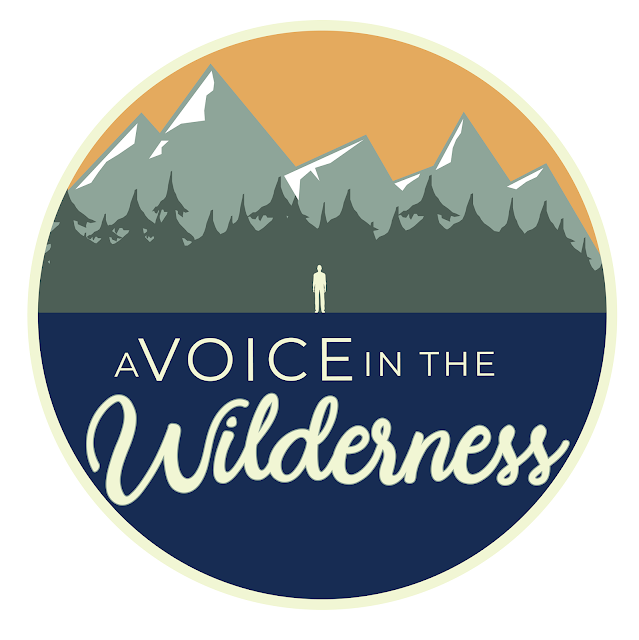 From men and women in the Old Testament to the early church leaders and apostles, God has chosen to use his people as a vehicle for his message, whatever wilderness they found themselves in. As John the Baptist prepared the way for Christ as a voice in the wilderness, we too prepare the way for the Kingdom of God. This upcoming year will be its own type of wilderness with the unknown and unexpected before us. But there's a huge need for people who will be God's voice in the lives of the people around them! 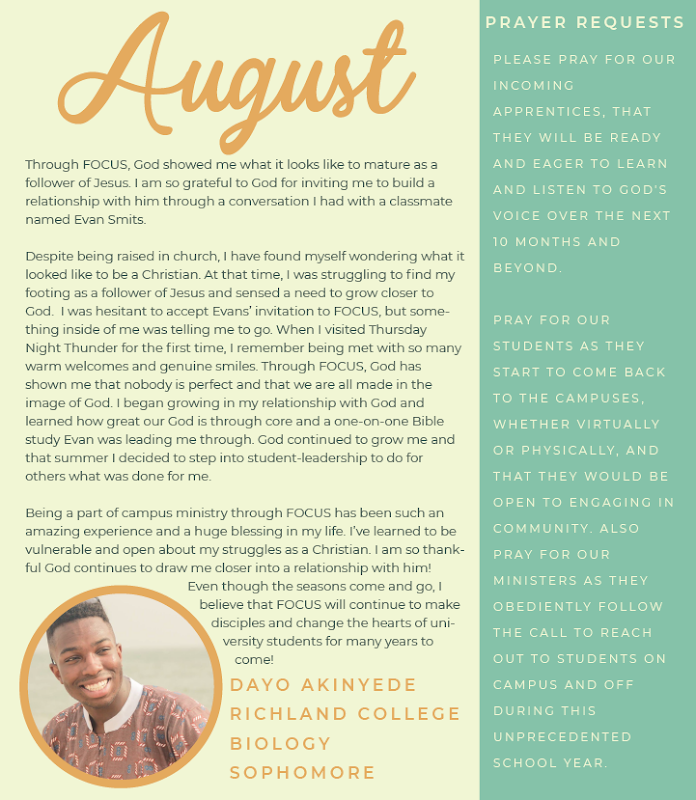 Thank you for giving and praying to make this mission possible. We need your prayers this year more than ever!