I wanted to comment briefly about the UTD students that I get to spend weekly time with this year. Four of them are the corefas in my peer team and one has stepped up to lead a peer team himself for his last year in school. (And then as a bonus, a testimony from a great Richland student I got to room with at SICM.)

Every staff person gets to spend time with amazing, servant-hearted student leaders. I'm so blessed to spend my time with these:

Casey is a sophomore this year. He comes from a really strong Christian family. His parents are involved in ministry at the Village Church - Plano and his older brothers were a part of different campus ministries during their college years. He's a young man who is serious about being his best for God. I got to know him some at SICM this year, and I've loved getting to spend time with him weekly. He's committed, kind, gentle, and others-oriented. He pursues the guys in his group and also pursues me in friendship. I've already had guys share with me stories of how Casey has had a positive impact on them personally.


Austin transferred from Collin's Preston Ridge Campus, where he already led a core last year. He's also living at the same house that I am this year so I get to watch his life pretty closely. He got serious about Jesus as a high school student because of YouTube videos that had an impact on him. He has a very understated, dry sense of humor that I find hilarious.  He told me when I first met him that he's shy, but I haven't seen much evidence of that. I think he has guys coming to his core from every one of his classes. From one class, 3 different guys are coming! He's a bold young man that people really like to be around.

Jesse is the artist of the bunch. He's a senior this year and is leading core for the third year in a row. He cares deeply about people and builds relationships both through deep conversation and by creating unique experiences to share. He's incredibly genuine and is very earnest about developing authentic friendships. While he's the most spontaneous of this bunch, it doesn't keep him from following through on his commitments.


Luke is a great young man from sunny San Diego. He's a serious student in the engineering school and he thought long and hard about whether he would have time to lead a core. But once he made the commitment, he has taken it very seriously. He has chosen to love the guys in his group, and he thinks deeply about God's word and about God's people.

At the beginning of the year, I assigned Luke and Jesse to write some questions to lead a core discussion on Ephesians 4:29. I planned to spend about 15 minutes helping them rework those questions into something workable, but I couldn't come up with a single suggestion! These two are very inquisitive, taking advantage of our times together to learn about me as a person as well as what I can teach them about the scripture and leadership. I enjoy every time I get to be with them. 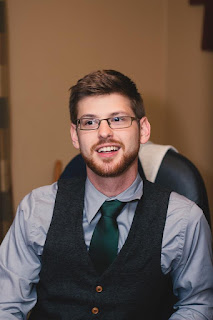 I got to study "FOCUS on Jesus" with Sean the summer after his freshman year at UTD. He has an incredibly unique and vibrant personality, but is also a pastoral thinker who leads his guys with care and conviction. He has already led core for a few years as he worked and pursued his degree, so we asked him if he would spend his last year as a student mentoring corefas instead of leading a core himself. He is very much up to the task. He thinks like a staff minister, and I find our times together each week personally encouraging and challenging. Sean is intense, wise, good-natured, purposeful, and very serious about Jesus. He's also fun and really fun to be around. It's been very special to get to spend weekly time with him again a few years after we concluded our one-on-one Bible study.

"In high school, I was the type of person that went out of my way to avoid people that I considered to be different than me. I was always looking for people that either talked the way I did or took part in the same things I liked. This led to superficial relationships and friendships. When I joined FOCUS, I really think God taught me that meeting people who were different than me - in every way - was a good thing. Through FOCUS, I have come to realize what it's like to have real relationships with people. In real relationships, you can talk to your friends about how you feel that day and not have to hide anything. When I first walked on campus at Richland, I was unsure about who I was or where I belonged. I thank God that I found a group that I feel like I actually belong to. Through FOCUS, God has been showing me that I belong wherever He has called me, and that it’s up to me to show others that they belong, too."


Please pray for these guys. Between them, they're investing in 40-50 other guys on these campuses! Thanks for helping make it possible for me to spend time training and equipping them. It's a joy and a privilege.
at November 05, 2017 No comments: