"Interpreting Matthew" was the title of the class I took at Regent College in Vancouver for two weeks after SICM.  I wish I could say it was a mini-sabbatical, but I actually spent a lot of time working remotely, especially on launching our new website! If you haven't been to anyfocus.org in the past couple days, you should take a look at the new layout (though we're still plugging in some remaining details and working out the kinks). That was a much bigger project than I anticipated, and I'm very thankful to Glenn Lanier for starting it while he was still on staff and to Laurence for taking over and finishing it. If you give by recurring credit card donation, someone will be in contact with you about setting up a new donation on the new site. It has some better features, and we'll be canceling all the transactions from the old site soon.

But back to Regent College--I had the opportunity to take a class from Rikk Watts. I've listened to a few of his classes over the past few years, so he kind of seems like a celebrity to me and my staff. He certainly doesn't think of himself that way though! I remember the weird look on his face when we asked if we could take a picture with him... But he did it anyway! 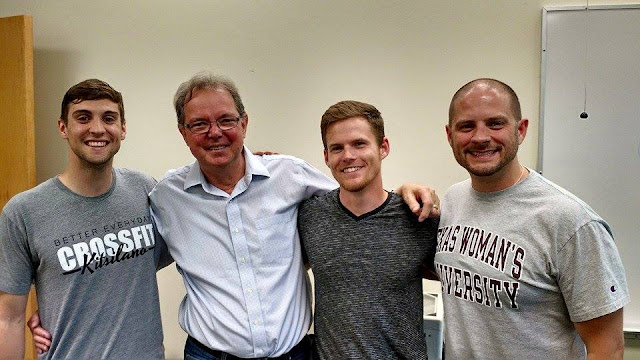 I can't begin to capture here all that I learned in 25 hours of lecture and at least that many hours of reading (so far). But a few main thoughts stick out:

1.  Jesus is Yahweh among us! I think I started out thinking that the gospel writers just told the story and the letters in the New Testament unpacked them and explained more fully who Jesus really is. (I'm not sure how that made sense to me considering that I knew the letters were probably written first!) The more I study the Gospels, the more I realize they have profound and purposeful agendas in what they want to teach about Jesus. Just as it took the disciples years with Jesus as the gospel story unfolds to figure out who Jesus is and what He came to do, it takes us paying careful attention and asking purposeful questions to figure out what men like Matthew and Mark were really saying.

I've seen and heard about Jesus being like a new Moses in the Gospels, but Rikk kept showing us how we only get that (as the primary message) when we start with that assumption. For example, many people have compared the Sermon on the Mount to Moses giving the Law to the people at Mount Sinai. But at Sinai, the people didn't go up on the mountain to hear Moses give the law. Moses and his close disciples went up the mountain to hear Yahweh, the Great I Am, give the law. And then Matthew says, "Now when Jesus saw the crowds, he went up on a mountainside and sat down. His disciples came to him, and he began to teach them" (Mt 5:1-2). In Matthew's mind, Jesus isn't acting like Moses; Jesus is acting like God. And when I started looking for that, I found it on almost every page of Matthew's Gospel.

2. We need to know Israel's narrative a lot better than we do. Matthew is really concerned with the idea of "fulfillment." He loves the phrase "and thus was fulfilled" along with some Old Testament passage. And yet, so often when I go read those Old Testament passages in context, I'm puzzled. They don't seem to be prophecies about Israel's Messiah. Rikk took us through each of those references and my mind was blown by how sophisticated Matthew was in his thinking! Where did we get the idea that just because we live 2000 years later, we must be smarter and more sophisticated than them?! Matthew knows that God's character doesn't change, and thus He can be expected to act the same way again when similar things happen. So Matthew can look to a current event that echoes a historical one and see the current one fulfilling the old one. He knows not just the verses before and after the ones he quotes but the entire context. So when he quotes a verse, he expects it to call to mind for us a whole host of ideas and impressions. Just like if I said "Four score and seven years ago," you don't immediately subtract 87 from 2015--you think of the civil war, of the struggle to end slavery, of how the founding documents of our country couldn't stand if we didn't honor their conviction that all men are created equal. Because we know our story.

If we are Christians, then we need to know Israel's story because it has become our story too. Then when Matthew quotes, "The virgin will conceive and give birth to a son, and they will call him Immanuel," we will think of how in Isaiah 7, King Ahaz has just refused to ask God for a sign in the heavens because he doesn't want to obey God, and see, as Matthew did, that God gave a sign in the heavens about Jesus that the Jewish King refused to acknowledge. In fact, only pagan magi noticed it! We won't think the prophecy of calling him Immanuel makes no sense when they actually named him Jesus. Instead, we'll realize that in Isaiah, Immanuel wasn't good news--it was a warning that God is coming and you'd better be ready...or else. Matthew bringing that up gives a different tone to his "Christmas story." I could go on and on with details like this, but more than anything I was struck by my pride at thinking I could understand the New Testament while being lazy about understanding the Old Testament.

3. God wants mercy, not sacrifice. Rikk called it "living in the grammar of forgiveness." The fundamental concern of Israel's scriptures is the character of God. He reveals Himself as I Am Who I Am. The fundamental problem of the Israelites is idolatry--worshiping the wrong god. And Jesus reveals a God who is gentle and humble in heart (Mt 11:29). In Matthew 18, the disciples were very concerned over who would be "greatest" in the kingdom of heaven. And in response, Jesus talked about forgiveness (among other things). For Jesus, greatness and forgiveness are connected. If I think I'm a Great One, I'm going to be more offended when others wrong me and want to punish them more for hurting me. When I understand real greatness, I'll be full of mercy toward others. It's what makes Jesus, Yahweh among us, greater than all of us when He hangs on a tree to forgive the sins of the world. Do I look more like Him or more like the Pharisees and disciples who were so concerned with doing things right and being recognized for it? A challenging question. When I really understand mercy, I'll be willing to admit my faults and repent. When I really understand mercy, I'll realize I'm like a little child who brings nothing to the table--I didn't bring home the bacon; I just came home to eat, so I don't demand my own way or claim special privileges.

I could say a LOT more, but I wanted you to have a glimpse at what the Spirit is teaching me. I'm sure it will take years for me to really absorb all this and figure out what it means for my life and doctrine. I pray these things spur you on to further learning as well.