At our Thanksgiving dinner last week, my family had the opportunity to host one of the new FOCUS students from UTD, Nikki.  She's seeking and learning and studying Jesus, and she's been great to have around this year.  At our Thanksgiving dinner she shared that FOCUS and learning about being a Christian are the things she's most thankful for from the past year.  Here's a little of her spiritual story:

Four months ago I moved to Dallas, taking the biggest gamble of my life at the time to pursue my passion, a bachelor’s degree in software engineering. I packed whatever I could fit in my car and left San Antonio, completely oblivious to another passion God had decided it was time for me to chase after--Him. Once I made it here, I met a group of women who befriended me no questions asked. At the time I was a religion hopper, jumping from Buddhist, Baptist, Atheist, Catholic, and settling on Islam. I was just trying to find my place and home knowing I had always believed in a higher power.  Through one of these women however, Christ challenged me to see which road I would take so I chose the one less traveled. This woman convinced me to go to FOCUS and after a few times I was challenged once more by her to do FOCUS on Jesus, so I agreed. I was so angry with her after the first day because this woman dared to challenge me and my beliefs, and after that day I planned on never returning. I wrote in my journal to God asking why He would be so cruel and allow this to happen and I asked God to show me a world divided and within that world where He wanted me to be. A few weeks later, still going to FOCUS and doing FOCUS on Jesus, I waited patiently for his sign. Then God gave me, Marwa, a woman I helped one night with programing homework in the computer lab. Again, Christ challenged me when she asked me what kind of Muslim I was. I couldn’t give her an answer because there was just so much more I had yet to learn. Raised Muslim, Marwa found Christ later on in her adult life and unbiasedly she showed me the good and bad sides of Islam, she also told me she would pray to God for me. I wrote in my journal again that night about a world divided and later realized that this was what I had asked God for. This was His answer to me, to become Christian. I was a woman who felt as if something was always missing and through FOCUS not only did I find friends, a family that I love unconditionally, but I also spiritually have grown because of every single person in FOCUS. I am happier now than I ever remember being before I moved. FOCUS has given something so precious, a priceless gift that will forever be one of the greatest I will ever receive in this life - helping me to find Christ.

With Thanksgiving last week, I just want to say how thankful I am to each of you and the many ways you support me in ministry and life.  Thank you to all of the financial supporters who invest in the vision of vibrant Jesus-communities on every campus, and are willing to partner with missionaries to make it happen.  Thank you to those who support with advice, support, friendship, and encouragement.  Thank you to all those who helped lay the groundwork for these campus communities during your own time in college.  Thank you to those who mentor or have mentored our current generation of student leaders--your fruit is growing!  This is truly a team effort--thank you for being a part of the team.

Thank you so much for your prayers and gifts! So many people have been extra generous during this tough season. God is doing great things on... 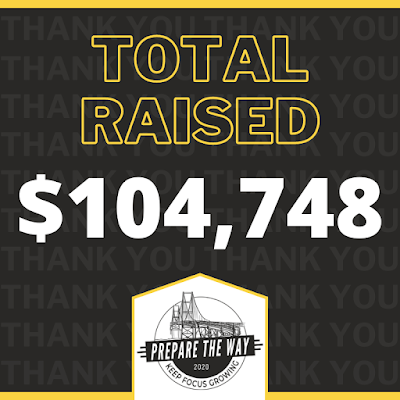