First off, we had a great Winter Camp a couple weeks back. So many good things are coming out of it, with many students making important decisions and seeking God more than ever before. One of our UTA students made a video highlighting the experience and I wanted to share it with you so you could get a picture of what it was like:

Josh is a student that I had the pleasure of mentoring during his first year as a student leader. He's a great guy who has invested in our younger students the past three years, and he asked for the opportunity to share his story!
"Before coming to college, I was in a desperate search for friendships. I had been the unfortunate recipient of a drug-induced fight. One night, people who I thought were my friends got high on cocaine while we were hanging out. All it took was a dispute over petty differences to send one of them over the edge, and it ended with me getting choked until I passed out. Thankfully, God brought me through that alive. However, this incident led to bitterness, rumors, and the loss of mutual friends. So, I ended high school not having many people that I considered friends. After all that, I was ready for college.

"Going into my Freshman year at UTD, I made it a priority to seek out friendships and Christian community. I found out about an event that FOCUS was having during welcome week and went to check it out. There I met Sagar Gandhi who, after just one conversation, invited me over to his house to play FIFA (a soccer video game). I was taken aback by this generous invitation and willingness to invite me into his life when he knew very little about me. I decided to go to Sagar’s Core and get more involved in FOCUS, where I developed strong friendships. Praise God for Sagar Gandhi’s invitation, the friendships I have made, and for how much leaders in FOCUS have taken time out of their busy schedules to pour into a broken and unimpressive sinner, like me, ever since!"

We've been given an amazing opportunity to start a ministry at SMU in partnership with Canterbury House (a ministry of the Episcopal Diocese of Dallas). We've been praying for years about starting a ministry on that campus, but because private schools are so different and have a number of barriers to entry, we knew it would have to happen in God's timing and in His way. The second half of 2016, He rolled out the red carpet for us! Canterbury has a building next to campus and a heart to reach people with the gospel. However, they don't have any students or campus pastors. So they've invited us to combine resources and run that ministry. Laurence Glenesk will stay on our UTD team but will be spearheading our work at SMU as we get started.

Tonight we had our first event down there to pray about what God is calling us to. We already have personal connections with a number of interested students from this event and from other connections, and Laurence will be following up one-on-one with each of them. Please pray that God will show us exactly what He's calling us to, will continue to open doors and provide connections, and will get us ready to launch something awesome in August!

Our First Full-Time Administrator!
As of January 1, our general admin Isabelle has moved from part-time to full-time! She has been working with us most of 2016 while she finished her degree at UNT, and we are so excited to have her focusing all her energy with us moving forward. She's sweet, competent, spiritual, and fun to work with. She supports our on-campus pastors, and she will be doing some pastoral ministry with us along the way as well. During her time as a student, she led core, led the entire worship team in Denton, and helped us start our ministry at NCTC. The need to have someone full-time is a testament to how much our shared mission has grown these last few years! 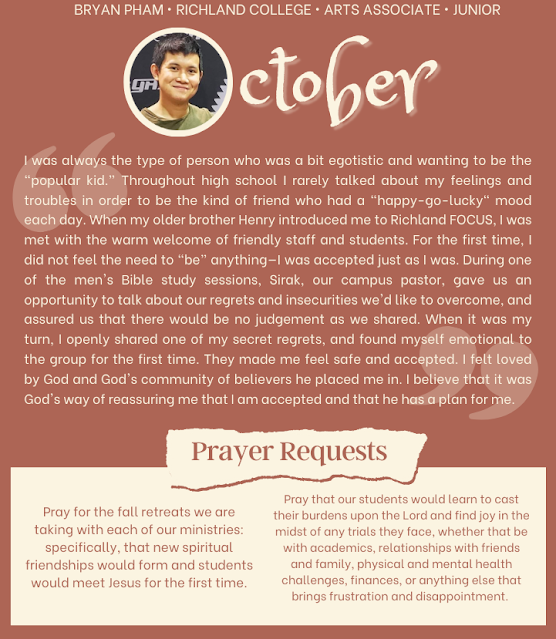